An official copy was made of Palmer’s diary for the year 1855 which was used in the trial.

Taken from an official copy made for the purposes of the Crown and reproduced in the Illustrated Life and Career of William Palmer of Rugeley, published in 1856.

Tuesday 26th June: Eliza confined of a little boy at 9 o’clock at night.
Tuesday 3rd July: Eliza came down stairs.
It is interesting that there is no mention of the death of Alfred, Eliza’s son, on the 17th November 1855. 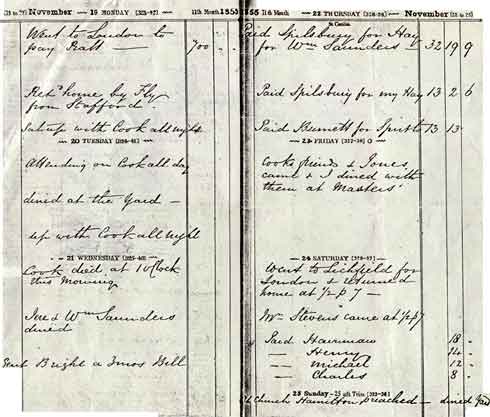 Copied from the Life and Career of William Palmer of Rugeley, published in 1856 – A page from Palmer’s diary from Monday November 19th to Sunday 25th November 1855. Shows Palmer going to London to pay the money-lender Pratt £700 on the Monday and he returned to Rugeley and sat up with Cook all night. On the Tuesday he attended Cook all day and was up with him all night. On Wednesday he recorded that ‘Cook died at 1 o’clock this morning’. Friday Cook’s friend and Jones came & I dined with them at Masters (I assume Cook’s friend was Stevens, Cook’s stepfather, Jones was Cook’s friend and doctor and Masters was the landlord at the Talbot Arms). Saturday Mr. Stevens came at ½ p. 7. Sunday – Church Hamilton preached.