When he left school his mother got him an apprenticeship with Messrs. Evans and Evans a wholesale chemists which was found in Lord Street in Liverpool. In those days there weren’t any cheques so money was sent in an envelope. Whilst Palmer was employed there, money was disappearing. An inspector was sent to the company in an attempt to track down the thief. Traps were set but without success until one of the partners caught Palmer opening a letter addressed to the company. Palmer was dismissed by his employers and was only saved from being sent to prison because his mother paid back all the money he had stolen.
He stole money to spend on his girlfriend called Jane Widnall who was older than Palmer. She, it was said, was trying to trick William in to marrying her but, when she found out that he wasn’t going to inherit (£7,000) if he married before he was twenty-one, she went off him.

He was then apprenticed as an assistant for Dr. Edward Tylecote in Great Haywood. Whilst he was with Dr. Tylecote his former girlfriend Jane Widnall turned up again. Jane’s mother had married Mr. Vickerstaff an assistant gardener who worked at Shugborough Park. Jane had not given up trying to get the money Palmer was due to inherit. To make Palmer jealous she started going out with Peter Smirke. Palmer was so angry that he cut up Peter’s boots and poured acid over his clothes. Again money went missing, this time from Dr. Tylecote’s and William and Jane ran off together to Walsall but were forced to return once the money ran out. His brothers were forced to settle his debts although it is claimed that Jane had a hundred pounds in her purse which was Vickerstaffe’s savings that she had stolen. William’s mother begged the doctor to forgive William for stealing his money and take him back but he refused and Palmer went as a “walking pupil” at Stafford Infirmary. It was whilst he was working for Dr. Tylecote that he met his future wife Annie.

As for Jane Widnall she could not return to Haywood and she is said to have written to Peter Smirke claiming that Palmer had deserted her when she told him that she loved Smirke. Smirke left Dr. Tylecote’s and married Jane and they both set off for Australia where he set up his practice as a doctor in Sydney.

In the book Illustrated Life, Career and Trial of William Palmer of Rugeley published in 1856, there is a claim that

We heard an old man at Haywood count upon his fingers as many as fourteen girls whom Palmer had got in the family-way. He had, by a foolish freak, been concerned in the death of Abley. An illegitimate child, which a woman in Haywood had by him, died suddenly; and he is suspected of foul play.

Is there any proof of the words of one ‘old man’? Later on the same page the book has kind words to say of Palmer supposedly from Mrs. Remington in whose house he lodged when he returned from London:

He was a good young man as ever walked; he was with me nearly a twelvemonth; he came to me in October, 1846, I think. I remember he asked me when my wedding-day was, and he said, ‘Well, then, that shall be mine;’ and so it would have been but for the Lord Chancellor. The wedding dinner was provided for forty, at Abbot’s Bromley. My husband and I were to go. “I never saw him intoxicated but once, and that was one night when he came back from a party.

‘Mamma,’ he said – he always used to call me mamma – ‘Mamma, I am very ill; I have been drunk; it is not what I have had, but I have been drugged.’ Those were his very words. He told me, when he was going away, without my consent; and, as I felt rather hurt, he said, ‘Never mind, I have let them to a very respectable man, and I have got you 2 shillings a-week rent, for I am sure you deserve it, you are so very kind.’ ”

From the minutes of the Weekly Board of Stafford Infirmary – May 24th 1844 – (kept in the Staffordshire County Record Office).

Palmer worked for a short time as a student at Stafford Infirmary. There was a suspicious death of a man called Abley (see First Victim?) whilst Palmer worked at the infirmary.

It is thought that it was whilst he was working at Stafford Infirmary that Palmer first became interested in poisons. He often took books on poison from the hospital library but was stopped, by the hospital authorities from taking drugs home. 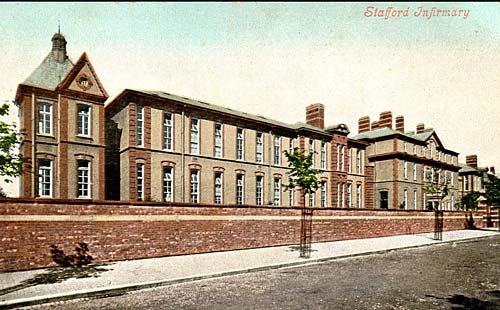 In those days if you were sent to Stafford Infirmary people said that it was like receiving the death sentence. Medicine and hygiene have progressed a long way since the first half of the nineteenth century. It was said that they saw using anesthetic as an unnecessary expenditure, and that they were always short of nurses and some of the ones they did recruit were often drunk or incapable.

Palmer did not stay long at Stafford Infirmary but went to London to train to be a doctor. Whilst he was there he wasted his time on women, drinking and singing and did very little studying.

Eventually the hospital authorities got in touch with Palmer’s mother and told her that there was little chance of her son passing the exams to become a doctor. His mother then hired a Dr. Stegall to help him study for his doctors exams. In those days they referred to such a tutor as a “grinder”. She promised Stegall £100 if he could get her son through the exams. Palmer must have worked very hard for the remaining weeks because he managed to qualify as a doctor. Stegall, however, didn’t receive his money and had to sue Mrs. Palmer. The case was eventually settled out of court although the matter was reported in the London newspapers.