The Palmer Family Vault is situated in St. Augustines Churchyard, Rugeley, beside the rear of the church on the north-eastern side.

During the Second World War ornate railings and ironwork from in front of houses and from churchyards throughout the country was collected. It was to be recycled and used to make weapons and ammunition for the ‘War Effort’. However a local historian assures me that although such iron work was collected during the war it was not in fact ever used to manufacture any weaponry. 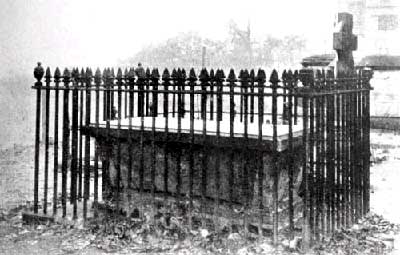 The Palmer family Vault as it looked in 1925. Picture from Life and Career of Dr William Palmer published in 1925. By then Joseph, William’s father , his wife Ann, his brother Walter and four of William’s five children, Elizabeth, Henry, Frank and John were buried in the vault. 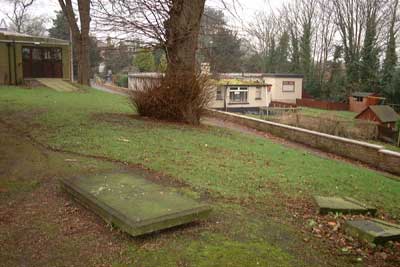 The Palmer Family Vault as it looked in January 2001 broken, decaying and vandalised. The end side pieces that
at one time held the top aloft are now strewn upon the grass beside the vault.